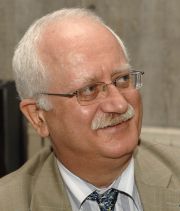 Christian Amatore, born in 1951 at Sidi-Bel-Abbes (Algeria), was educated at Ecole Normale Supérieure (ENS), the leading French educational and research center. He was Director of the Chemistry Department of ENS, Director of Research in CNRS and is Full Member of the French Académie des Sciences. In 2007 he was appointed as one of the twenty members of the High Council of Science and Technology to advise the President of the French Republic on scientific matters.

Christian Amatore gave the molecular electrochemistry new directions and endowed of instrumental and conceptual tools that allowed this discipline to overflow its traditional fields to face major problems in organic chemistry, inorganic, organometallic, and more recently biology. Christian Amatore, in partnership with Mark Wightman (USA), had a pioneering role in the development of ultramicroelectrodes worldwide.

His researches involve the development of advanced electrochemical methodologies for investigating extremely complex mechanisms of organic and organometallic chemistry under the very conditions used by synthetic chemists. Amatore's activity in kinetics is best illustrated by the rationalization of electron transfer catalysis, electron transfer activation of molecules and more recently by a thorough series of works relative to the elucidation of the most important mechanistic aspects of catalysis by homogeneous palladium complexes, an extremely active area in today's catalysis for carbon-carbon bond making in fine chemical industry. The well recognized contributions of Amatore's group in this area have opened new views for rationalizing these important processes which have already led to the development of new synthetic strategies.

Amatore's contributions gave electrochemistry new concepts and new tools which are essential in offering electrochemistry new entries in several mechanistic problems in organic, inorganic, and organometallic chemistries and more recently into the biology of living cells. In this respect, one should stress his pioneering work in collaboration with Mark Wightman for the development and promotion of ultramicroelectrodes. This led to the precise detection of extremely minute fluxes of essential messengers emitted by living cells during their interactions within tissues and integrated organisms. These researches involve vesicular release of neurotransmitters, oxidative stress cellular bursts, as well as the intimate cooperative coupling of these basic processes within the brain.